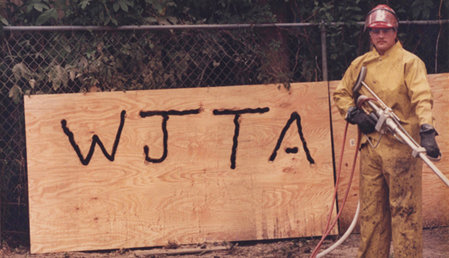 35 Years Of Progress In WJTA

The WaterJet Technology Association (WJTA) was formed in 1983 in order to sponsor and organize biennial conferences on waterjet technology and to develop codes of practice and safety for the waterjetting industry.

The prime movers in the formation of the WJTA were Dr. Fun-Den Wang of the Colorado School of Mines and Dr. David Summers of the University of Missouri-Rolla (now known as the Missouri University of Science and Technology). 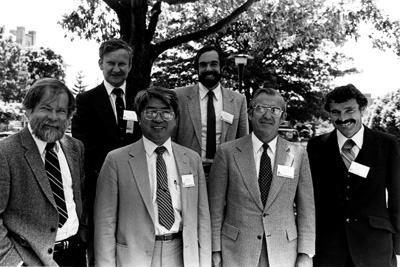 It is no accident that two mining professors (Drs. Wang and Summers) were interested in waterjet technology because waterjet technology had its genesis in one of the technological challenges of the 1850s—that is, a practical way to mine placer gold during the Gold Rush in California. Waterjet mining, usually called hydraulic mining, was developed to meet this challenge. The main tool used in hydraulic mining was a method of generating large waterjets called a hydraulic monitor.

The WJTA has recognized its roots in hydraulic mining by giving its highest award –the Pioneer Award – in the form of a trophy comprised of a representation of a monitor cut out of brass by a computer-controlled abrasive waterjet.

Waterjets can be applied in three technologically useful ways. These are to:

Waterjet technology and the WJTA have advanced in all of these areas during the 35 years since the founding of the WJTA, but at different rates based upon economic incentives and industry need. Niche applications have been found in heavy construction and mining, but the largest market for the use of waterjets in the fragmentation and excavation of solids has been in the hydrodemolition and scarification of concrete and other construction materials.

In terms of economic applications, the most significant market gains for waterjet technology have been in the industrial applications related to cleaning, coatings and corrosion removal, and cutting. Waterjets can clean surfaces because the jetting force necessary to remove material adhering to the surface is often much less than the force that could damage the underlying substrate. In addition, waterjet impact energy can be placed in places that are difficult to access. For example, in the inside of heat exchanger tubes. 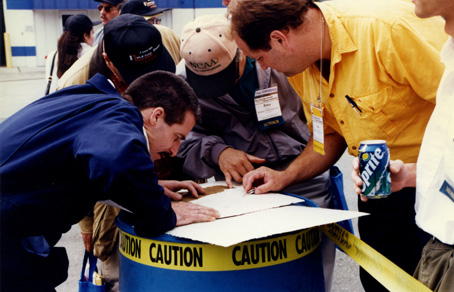 The following is an example of how waterjet cleaning benefitted from early waterjet mining research. In 1981, Pat DeBusk, then of HydroServices, visited John Wolgamott and Jerry Zink of StoneAge, Inc., and other researchers at a waterjet conference at the Colorado School of Mines. StoneAge was showing a waterjet assisted rock drill, and DeBusk asked if this drill could drill plastic out of plugged heat exchanger tubes. This led to HydroServices introducing rotary lancing machines to the industrial cleaning industry.

The Colorado School of Mines was also working on a Bureau of Mines–sponsored program to develop a flexible waterjet roofbolt-hole drill for use in low headroom coal mines. This research suggested to DeBusk that flexible lances could be used to clean tube bundles from the bottom up as opposed to top down. This enabled the tube bundle cleaner to take advantage of gravity to remove cuttings. Waterjet cleaning is now used routinely in a number of process industries, especially in the petroleum industry. 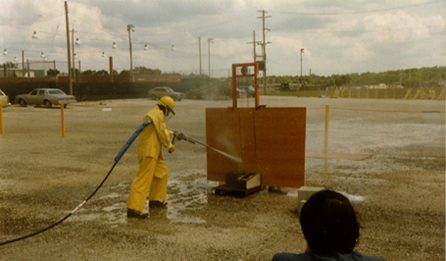 The precise cutting of solids with pure waterjets is a now a widely accepted method. Dr. Norman Franz, a WJTA pioneer, showed – working with the McCartney Division of Ingersoll Rand (now KMT) – that a precise waterjet can be formed through a sapphire orifice to slice soft materials such as wood. Commercial systems are now widely used for slitting and trimming in paper production, diapers, food cutting, and automotive applications such as cutting gaskets, dashboards, and carpets. The ability to easily manipulate a waterjet makes it possible to cut practically any configuration. The precise control of waterjets in difficult-to-access locations, for example, in the human body, has led to notable advances in surgery.

The formation of the WJTA coincided with the introduction of abrasive waterjet cutting technology by Flow Research (now Flow International) which was first reported by its inventor, Dr. Mohamed Hashish, in 1983 in the first conference proceedings of the WJTA. This new tool enabled the cutting of practically any material and significant advances have been made since then as reported in the following nineteen WJTA proceedings. Recently, exciting advances have been made in precision cutting of aircraft parts, jet engine components, glass, flash memory cards, circuit boards, and in micromachining of medical parts.

The rise of environmental awareness in recent years has led to an increased effort to control effluent from jet cutting and cleaning jobs. Many waterjet contractors combine waterjetting and high-volume air movers (industrial vacuum trucks). This, in turn, has added vacuum truck operators to the WJTA membership. The WJTA has been very active in developing safety training materials for use in the vacuum truck industry. Industrial cleaning contractors are presently the fastest growing segment of the WJTA membership. 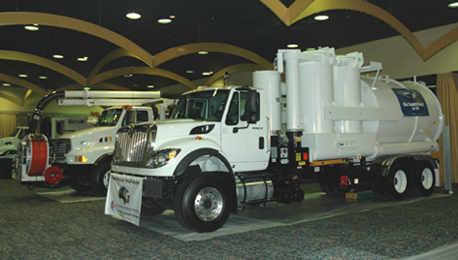 In recognition of this, the Industrial & Municipal Cleaning Association (IMCA), a special interest group within the association, was formed in May 2009 for members who have an active interest in industrial and municipal cleaning. The purpose of the IMCA is to provide a focused forum for members who are involved in industrial cleaning to communicate with each other, share ideas and knowledge, and foster closer collaborations.

WJTA serves its members by disseminating information through a number of channels. These include the periodical Jet News; booklets such as the safety manuals Industry Best Practices for the Use of High Pressure Waterjetting Equipment and the

The 2017 Conference and Expo marked the 19th waterjet conference. These conferences have grown from a modest beginning with the first conference to the point where they are recognized as the premiere waterjet meeting in existence, containing the largest volume of papers on waterjetting. The published proceedings of these conferences relate the latest advances in waterjet technology and are posted publically to the WJTA website to encourage further education, development and advancement of the field. 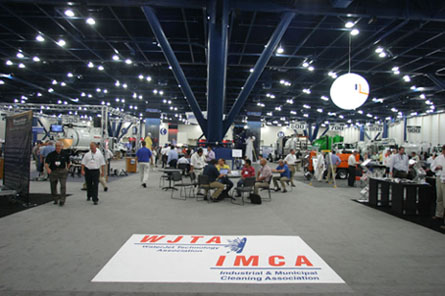 August 2010 marked a move to a much larger venue for the inaugural WJTA-IMCA Expo held at the George R. Brown Convention Center in Houston, Texas. The Expo is held during even-numbered years, and the Conference/Expo is held during odd-numbered years. The larger convention center exhibit hall has allowed for large equipment and hands-on displays of industrial waterjet and vacuum equipment, and equipment is also operated and demonstrated onsite. The WJTA’s conferences are among the only in the world with live demonstrations of waterjet cleaning and cutting. The 2018 WJTA-IMCA Expo in New Orleans will mark the association’s ninth convention center tradeshow.

The periodical Jet News, published by WJTA six times per year, and edited by Dr. George Savanick, a founding member of the WJTA and a pioneer award recipient, highlights the latest in waterjet techniques and new applications from around the world. WJTA has members in 38 countries on six continents.

A major accomplishment of the WJTA has been the development of safety manuals and videos. Historically the majority of waterjet accidents have occurred while using manually operated high pressure waterjetting equipment. In response to these accidents, WJTA published and distributed the safety manual, Recommended Practices for the Use of Manually Operated High Pressure Waterjetting Equipment. 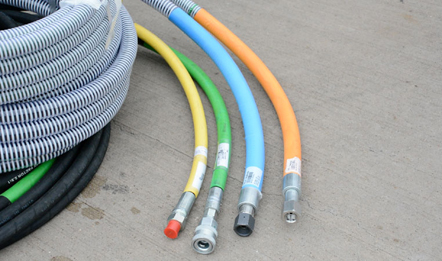 In 2017, a major update to the waterjetting Recommended Practices was published under a new title, Industry Best Practices for the Use of High Pressure Waterjetting Equipment, reflecting the more stringent recommendations in the document. This manual outlines the recommended practices that should be followed for manual and automated waterjet operations. It is the primary reference tool in most waterjet company safety manuals, asset owners’ contractor safety guidelines, and is also used as a reference in court proceedings.

Industrial vacuum equipment is often used in conjunction with waterjets. WJTA developed a safety manual, Recommended Practices for the Use of Industrial Vacuum Equipment. This manual has been published in English and Spanish, and a safety video is also available. WJTA has distributed over 20,000 of the English and Spanish manuals. Over 450 of the safety videos have been distributed. 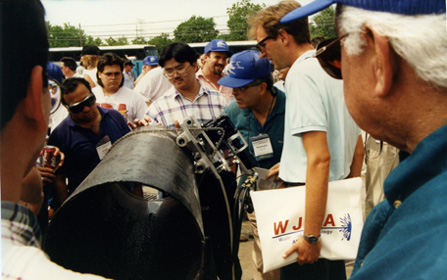 WJTA has also produced a medical alert card that is carried by many waterjet workers. This card gives advice to attending physicians regarding treatment of injuries by waterjet penetration into the human body. These accidents are rare, so many emergency department physicians have no experience with injuries caused by waterjets. To date, WJTA has distributed over 210,000 WJTA medical alert cards, which are carried in the wallet of waterjet workers.

Beginning in 2017, WJTA has worked to create an entry level hydroblaster training and certification protocol. The initiative has been undertaken in response to a need in the industry for more standardized training for entry level workers mainly using waterjets in industrial cleaning applications. Both contractor and asset owner training requirements can vary, contractors must contend with high employee turnover, and many contractors face challenges in maintaining an adequate safety and training culture.

To this end, WJTA has partnered with the Houston Area Safety Council (HASC) to develop a computer-based training curriculum, with a hands-on portion currently in the final stages of development. The training will soon be offered through the HASC facility, the HASC mobile trailer, and the Association of Reciprocal Safety Councils (ARSC) network, as well as WJTA-certified trainers around the world.

In addition to training and workforce development, WJTA has launched new initiatives aiming to promote a culture of safety and to educate the industry. WJTA solicits anonymous reports on incidents and near misses that can be shared as learning tools with members around the world. WJTA also is beginning to develop case studies from asset owners and contractors on the impacts of hydroblasting automation on their productivity and outcomes. Finally, a global standards committee has been formed to collaborate with other waterjetting safety associations worldwide; educate on waterjet cleaning technology and automation; and to support the development of best practices guidelines in emerging markets.

WJTA is dedicated to improving safety, technology, and trade, and your support is crucial to these efforts. Enroll as a member to support WJTA and gain access to our resources, participate in committees and more. Join Now!